Master Bangor the Ringgiver, of the Frost Lands, Polaris

"People like Bangor are all "copper tops". Instead of posting on e-sam all day he really should have opted to be something important. You know, like a rock star."-Rand 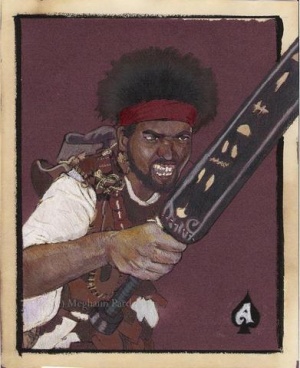 Amtgarder from the Frost Lands (in Wisconsin) who posts frequently on E-Samurai, often in character as a Barbarian. Bangor has periodically revealed himself to be a barbarian of many languages, including German, Russian, an Arabic. He is often quoted on the in their own words pages.

He is known in his park as a wily Barbarian, full of tricks, and has received honourable mention at many events for his roleplaying ability. He placed third in the Flurb of the Year contest in 2006. He has one of the shortest backstories for a flurb in all the lands: "A Barbarian emerged from the forest. He was thirsty." Very popular with the interkingdom set he was 'Roasted' on Esam in October of 2008, he also has had a filk written about him. 'Axe in the back!' by Asmund.

Run away, you just can't hide
Bangor's got a pimp-ass ride

He got a hun-dred foot dragon - with a tail
Check your pants hommes, what's that smell?

don't hide now, there ain't no use
From that swank e-sam abuse Bangor is deathly afraid of Fraggles. It has been said that the only way to truly defeat Bangor is with a fraggle. No one is certain exactly why, but he has pointed out time and time again that they are the only creature that can eat glass and survive. (Note - Fraggle's don't actually eat glass. They eat the construction material that the Doozers create, which only looks like glass. The Doozers make said material out of radishes. So maybe Bangor is merely afraid of radishes.)

Bangor is also known to fear large amounts of barbarian women in the same place.

Bangor received the Ring from Bromhir during Spring War '08.
His belt is still for his axe.