The Avian War began on December 3, 2019 by decree of Regent Arden Dawnseeker of the Kingdom of Crystal Groves as delivered by Sir Jynx Mercades.

Although this ban had no real authority, it became a vexation upon the King of Crystal Groves. This conflict had ruffled some feathers in the Kingdom. Therefore, King Faelyn issued an Official Proclamation on December 10, 2019.

The matter became an International Amtgard issue when on December 12, 2019 Corran Gray of the Hidden Blades posted a Missive on the Amtgard Facebook Discussion Board, asking Amtgarders everywhere to choose a side.

As a result of this Missive, Drū-Kära the Dryad chose sides in favor of Avian kind. Subsequently, Drū-Kära's kingdom became involved.

In April and May of 2020, Shadow and Drū-Kära Silverblade sent a dozen avian soldiers to infiltrate the U.N.I.C.O.R.N. stronghold, the castle of Sir Jynx Mercades.

The first flight arrived on April 22, 2020. Although the heroes were discovered, fortunately there was an avian sympathizer within the castle walls, Sir Piper Lesonette who has been giving them room and board. 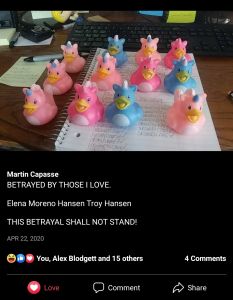 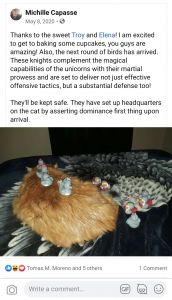