Grand Duke Sir Aramithris of Meadowlake, of the Lands that Burn

Easily the most important figure in the history of Amtgard. Although he did not found Amtgard, he led the development of the game from the early days through the beginning of the 6.1 Rulebook.

Used the name Noman when he first appeared at Amtgard, but quickly adopted the name Aramithris of Meadowlake.

In mundane life writes science fiction and fantasy stories, mostly in the short story format. He has had one book collection published of his work, Babylon Gardens, subtitled "An Introduction to Selected Works of J.W. Donnelly". Most of his other work can be found in magazines and collections.

Read more About JW on the in their own words pages.

To many, he was more a caricature than a real person. Many remember him most for his rants or his Aramithris' catch phrases. Known for his wine of choice, Franzia. Much of this caricature (and wine-reference) is featured in the song 500 Boxes.

From around the mid-2000s, Aramithris went into seclusion and did little to influence Amtgard. In late 2018 he reconnected with Amtgard online and came out to visit the Burning Lands again, and he has remained an active presence online and occasionally at parks since then.

Founder and long time captain of the Claw Legion, until he left it to found Archon. (Sources differ on how voluntary his exit from Claw was, though his exit from Archon was not voluntary).

Served as King of the Burning Lands and President of the BLBOD many times, and even when out of office often exerted tremendous influence on the Burning Lands. In 1994 he became the first person to become a 4-belted knight

on the left side, facing away from camera.

his device is an ankh. 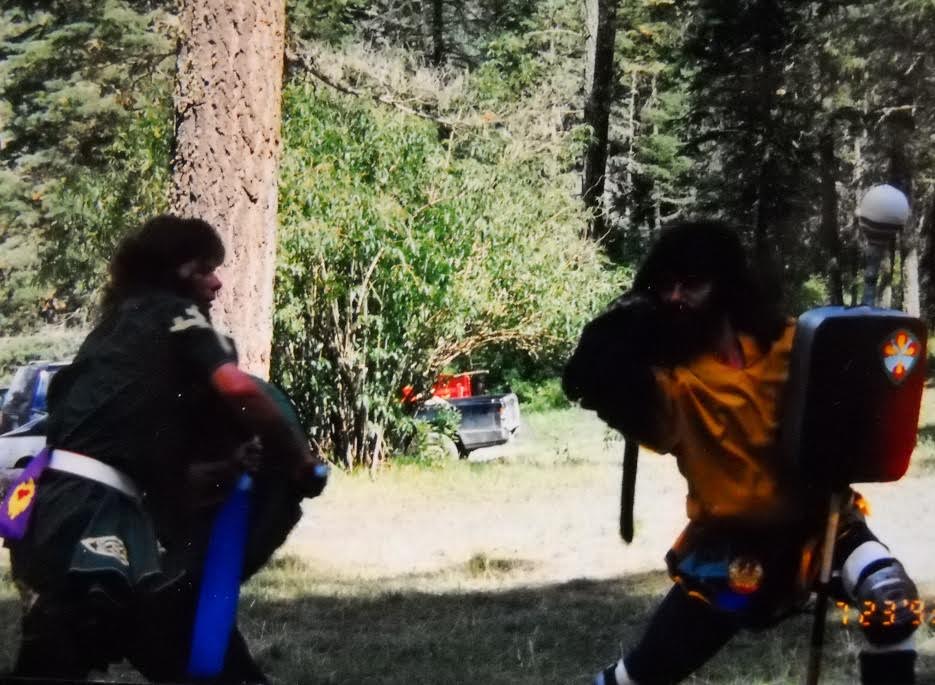