Lady Squire Aramis, of Hero's Pass of the Celestial Kingdom

The story of Lady Aramis more than likely has her origins inspired by the lovely and graceful Nichelle Nichols. Seeing her play the character of Uhura and associate with that sci-fi character would be a door opening to that fandom. With an open mind to sci-fi at that point, Lady Aramis would then be drawn to an assortment of cute guys throughout science fiction, fantasy, martial arts, and monster movies. And somewhere mixed in all this was found a love for the midieval and renaissance times.

Like many she dabbled in the ultimate gateway into all realms fantasy, and that of Dungeons and Dragons. Later while attending college in Missiouri she would try out for a time the live action element of the Middle Ages and Renaissance in the S.C.A.. This proved to be an enjoyable experience in the six months she was involved with the club. Between the S.C.A. and her local Star Trek club would be her first creations of cosplay and costuming.

After college Lady Aramis made the bold move to Texas. While taking some college classes Lady Aramis was talking to a friend of hers on campus when Magnus and Clu Da'Bard, who had just got out of class, walked up. Magnus and her friend started talking, so Clu started talking to Lady Aramis. Making conversation, and interested in recruiting more women for Amtgard, Clu mentioned he was part of a live action fantasy role play group. Lady Aramis remembered her time with the S.C.A. and liked Scarborough Faire so found the idea interesting. With that, Lady Aramis was introduced to the world of Amtgard.

Ever adaptive and curious, Lady Aramis would join Amtgard shortly before reign 20 (1998) in the Kingdom of the Emerald Hills. While working in her mundane job, she would meet Cyn De'Isis who was a part of the Amtgard Household Crimson Falcon/Redhawk which had been disassociated from the local kingdom for several years. Due to the peace that was brokered by her friendship, the astranged household would rejoin the Kingdom of the Emerald Hills, aiding not only to the success of that reign, but also to the grown of the western half of the Emerald Hills through contributing to the start and continuation of the Barony of Mourningwood Glen and to the kingdom as a whole as the years would go by.

In this time Lady Aramis added two new things in her easy going and brave spirit: Camping, which Amtgard seemed to like to do in spades, and Amtgard combat, which she tried in Scout till 3rd level. In time Lady Aramis would be drawn by the avenues of arts and sciences that Amtgard had to offer.

During 1999 Lady Aramis would be a part of an effort to collect donations after a massive tornado devastated Oklahoma City. This tragedy effected some of the Oklahoma Amtgard members and their communities at that time. It was also during this year she and other women of House Redhawk looked into various art projects of sewing, candle making, cooking, and leatherwork. During the spring of the same year married Duke Goodwyn Clu Da'Bard, adding the ancient bard family surname to her own name.

In 2000-2001 Lady Aramis took classes at the Isis Studios. While there she discovered that Reyna Arafael, one of the long lost founders of the Emerald Hills, was working at the studios during that time. Reyna made friends with Lady Aramis and other members of House Redhawk following that encounter. When invited by Clu Da'Bard to be the one to drop the sword on him during his knighting on December 2002, Reyna Arafael would graciously accept. Reyna's return after her fourteen year absence was a joyous occasion, and the Emerald Hills has been graced from time to time by her presence since that event.

During this same time mundanely Lady Aramis extended her interest in sewing to include fashion design courses at El Centro Community College. Throughout 2002 & 2003 the skills learned from those classes would lend to her 1st and 3rd garbers given in her service to garbing new members of the growing Duchy of Mourningwood Glen. All the while the 2nd, 4th, and 5th Garbers being awarded by the kingdom level for a knight's tunic in 2003, a green dress in 2008, and a velvet dress in 2010.

During the and into the fall of 2002 Lady Aramis would get her first order of the Rose from the water contributed to the park populace during the hot summer, and has contributed food and water since. In her love for arts and sciences comes also a love for the people around her. In time boffer weapons and battle garb were exchanged for garb that would add to atmosphere and help from Nirvana. By 2013 Lady Aramis was nearing 6th level color. Around circa 2008 Lady Aramis was noted for her helpful spirit at the park level and became squired to Sir Gavvin Quinn to further encourage her in the arts and sciences. In March 2008, to help with a park activity she was even co-horced into picking up a sword again and joining an all women (Exception Nettle) team of Harpies for a monster quest.

In 2010 the Barony of Mourningwood Glen would receive a order of the Flame for their contribution of Feast for summer coronation. From that Lady Aramis diversified her path of arts and sciences to add cooking entries. Like the garbers while the 1st and 3rd level garbers were awarded at the park level for Beef Bouguignon and Saba Noodle Salad; the Kingdom level would award the 3rd, 4th, and 5th Dragons for Lady Aramis's Dump Cake, Lamb Stew, and Apple Butter Pie.

In the September 2013 Dragonmaster of the Kingdom of the Emerald Hills with fifteen contestants, Lady Aramis would score third place at 2.49 points with 5 entries after Aylin with 5.0625 points and 7 entries, and Hrog for first place with 8.215 points and 18 entries. 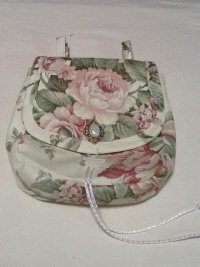 Entry for Dragonmaster LI of the Kingdom of Emerald Hills 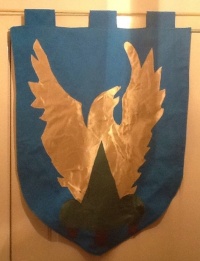