a former Park under Burning Lands located in Puyallup WA.

As of Nov 23, 2013, the Burning Lands Board of Directors pulled the contract for Angel's Haven. They are therefore no longer an Amtgard chapter. The reasons for this action have not been made public. 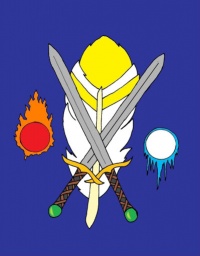 The Duchy of Angel's Haven was under the Kingdom of Burning Lands, one of the many kingdoms of AMTGARD. was located in Puyallup, Washington at Bradley Lake Park and met every Saturday (rain or shine) starting around Noon and running until around 6:00pm (or whenever they decide they where are too tired to play).

Amtgard is a free, non-profit, non-sectarian, Live Action Role Playing (LARP) group dedicated to recreating the medieval and fantasy genre. they strive to offer an array of opportunities for our diverse members, from recreating safe individual and group combat (using proven "boffer" weapons) for those who revel in battle to the joys of cooking, sewing, and crafting other Arts and Sciences for those who have interests in those arenas.

Angel's Haven welcomed all participants. Combat activities are designed for those 14 and older, however those under the age of 14 may be allowed to fight with parental permission, a guardian on site and Monarch's Approval which is decided on a case by case basis. They also had kids activities based on the number of smalls regularly attending.


Bradley Lake Park entrance is the first right. Overflow parking has been added across the street. We meet under the main covered area during the fall and winter. During the summer we meet under the nearest shade tree.