Lord Anberon Nole, of Inland Ocean, in the Kingdom of Northern Lights

Anberon Nole is the Amtgard name of Lee Miller 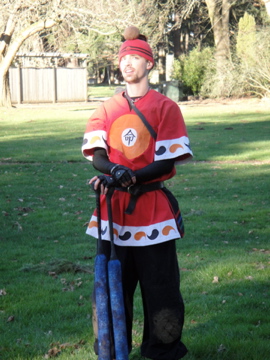 Character Bio: Anberon Nole was a young man with a dream. He'd heard about the fighting prowess and seemingly supernatural abilities of Knights, Paladins and Anti-Paladins and knew that he wanted to be one of them. After learning what it took to become a Paladin, Anberon began to study the Way of the Sword in the hopes of one day becoming a Sword Knight. His studies in war led him to the Crimson Sanctum where he truly began to first learn the blade, the shield, the staff and the pole. After learning the basics of such warfare, Anberon began to study the mystical arts of the Healer. The path of the Paladin was what he wanted, and he wanted to follow the Ways of the Light. During his time at the Crimson Sanctum, Anberon was able to see what real Knights, Paladins and Anti-Paladins were like through events such as Darkshore. Seeing them in action only furthered his desire to become one of them. Seeing his dedication to those around him, Prince Euric was kind enough to bestow the title of Lord upon young Anberon. It is a title that he enjoys but is hesitant to announce for fear of seeming pretentious.

His studies of the ways of Healers eventually lead Anberon to the land of Inland Ocean. It was here that Anberon met several people who would begin to train him in what it truly took to gain the title of Knight. Harnessing his desire to help and protect others, Anberon strove to become a worthy Warrior on the field of battle in addition to being a valuable Healer when called upon. Seeing that his studies of Warriors and Healers could only take him so far, Anberon sought to learn the Ways of a Monk in an effort to understand how to combine the skills of the Warrior with the healing of a Healer. During his travels around the land of Inland Ocean, Anberon noticed that the path to becoming a Sword Knight was truly daunting. This revelation did not deter him from pursuing that path, but it did cause him to consider other ways he might enter into that illustrious Circle of Knights...

Mundane Bio: Lee was first introduced to Amtgard by Nancy Nims (Lalailom Risteska) when they met at college in 2004. Shortly after being introduced to the game, Lee and Nancy worked together to form a local chapter that came to be known as the Crimson Sanctum. After graduating from college at the end of 2007, Lee's participation in the local chapter and nearby events waned. Lee and Nancy, now married, moved to Washington to pursue Master's Degrees in their respective educations. After moving to the Seattle area, Lee and Nancy became involved at Inland Ocean and currently call the park home. Lee is currently belted as a Man at Arms to Sir Gabrial Soulstealer. Sir Gabrial Soulstealer has offered to help improve Lee's fighting skills in addition to assisting with random craft projects. Lee is currently a pledge to the Golden Lions fighting company.

Pledge to the Golden Lions.