”Have you ever seen wolves hunt. Divide, and attack with speed and ruthlessness. Be Amphesus.” 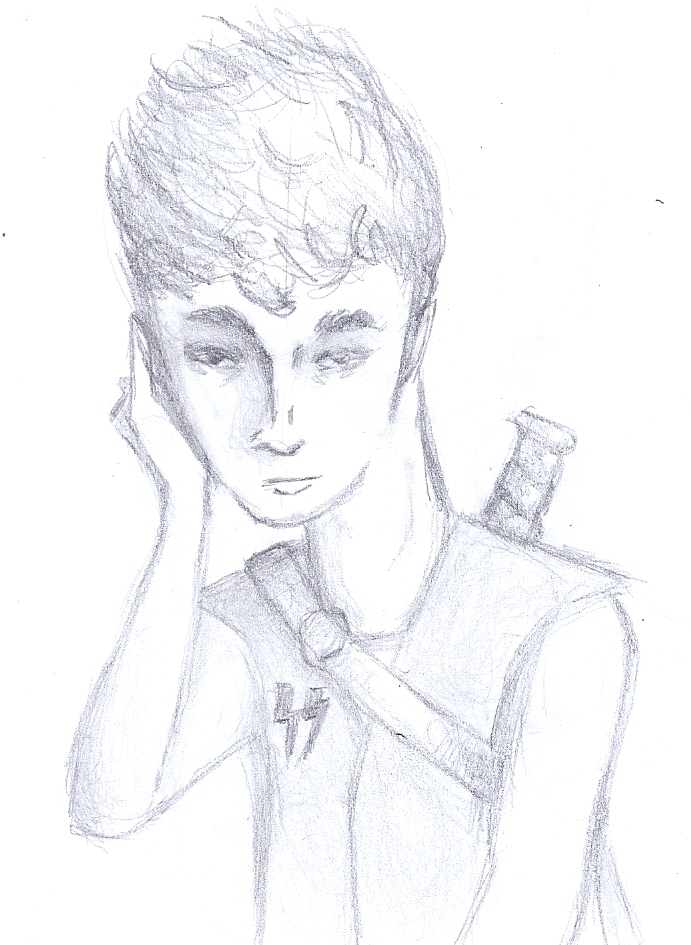 A brilliant tactician, he brings his experience as a wolf on the battlefield… Expect Ambushes, Hit and Run and Guerilla Warfare.

Strong distrust in mages and magic. He views them all as liabilities, even friendly mages like Krytor.

Tends to act in the moment. Short tempered, and impulsive, he offers little mercy for his foes.

As Young Amphesus, me and by three of my wolf brethren used to hunt amongst the gilded trees, but local villagers insisted that we were not allowed on their lands, nor were we allowed to kill their animals. They enlisted the help of a mage to drive us out of our lands. He tracked us down to an abandoned temple. We fought for some time when he casted a spell on me. However the spell misfired. My body was that of a human and while by brother’s were dead, I could hear their voices in my head.

The Mage was ashamed by his tragic mistake, and either lacked the mercy or the common sense to kill me. Instead, he sent me on a ship to a faraway land. After quite a long trek, I arrived, beaten and broke to a large city. Vice and lust grew rampant in this city and I quick adapted. I used my skills as an Amphesus to murder people for money. I acquired quite the sum of money.

Now, what if I told you that you and the people of your fighting clan were the only people I every told this. You’ve hired me for quite some time, so I feel that we have at least some trust between us. However, I did not tell you this information for no reason. Frankly, I need your help.

I call you Coresus (Core-ious) for a reason. In my native tongue, I mean’s “killer” but it holds a different connotation. Coresusses always lead hunting units and usually attack head-first. I view as such and I hope you and your company will assist me in killing the mage that made me human. In turn, a quantity of 1000 gold be delivered to you once he is died, and more importantly, you will have earned my loyalty. I know you want people dead, maybe we can help each other out.

The Vengeful Spirit of Amphesus Wolf

Little is known about The Vengeful Spirit of Amphesus Wolf. He sacrificed himself to save the Westmarch forests from evil, dark magic, that much is know. But the rest is rumor. Weary travelers claim the he is a demon resting among heretics, or an elemental of fire and death. However, most scholars would disagree with such claims.

The Wolves praise a demi-god they call The Wolf Mother. Humans knew her as Princess Elizabeth the IX. Much of her tales is legend, but some facts are known. She fled into the forest. There, she spent some time with a pack of wolves, suppositely learning their ways. After some time, she ventured back into her father’s castle only to kill him, then her fiance, then the god Amphesus (don’t confuse him with Amphesus Wolf, wolves traditionally don’t have names and are named after thier job. Amphesus means Assassin.). The wolves believe that their gods died, and their essence made life as we know it. Thier essence exists in everything, an energy like air, invisible, but persistent. During the Westmarch civil war between Elves and Men, men began to burn the forests to flush the wolves out and make sure they were not a threat. This genocide destroyed the Old Wolven Empire and almost cause the wolves to become extinct. In this time of desperation, the wolves tried to revive their dead god so he would claim vengeance on their behalf. However, quite the opposite happen, the imbalance cause natural disasters that killed even more wolves. Settling in small bands, the wolves lost everything, their families, their home, even their god. Stripped of their pride, the wolves fled to the what little forest was left. When Elizabeth killed Amphesus, She restored the natural balance, and arose to godhood. She claimed any who follow her example will become gods as well. Even since then, hundreds have claim godhood aside her.

The reason many notice Amphesus Wolf and not his godly counterparts is his intent. Unlike other gods, Amphesus Wolf is vengeful; an angry spirit that wishes only harm on those who harm nature. All gods have access to magic, but Amphesus Wolf has chosen a path drenched in fire and death. However, there is one band of humans his is willing to protect. The men and women of Behial Peaks, whom he calls his new wolf pack.