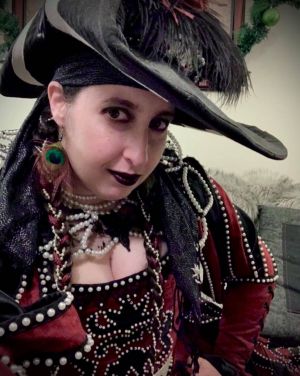 Anne Cash is "a dearly beloved member of Caradoc Hold. Because she is awesome. The end." - Lady Glyn

Anne moved to Twilight Peak to be with her now husband Wunjo, but due to work schedule conflicts the pair had to move to another park. They are now proud menbers of the Duchy of Linnagond.

Having very successfully run a food drive in Caradoc for several years every Halloween called Frights for Foods, she's now heads the Canadian program Trick or Eat in the Northern Empire.

Anne is the founder of the Facebook group Knights AMA. The purpose of this group is to provide players with easy access to the knowledge, experience, and mentorship of knights, as well as give knights themselves the opportunity to teach without the restriction of location or time.

Captain of the legendary ship The Phantom Skull

Admiral of the ships The Phantom Skull, The Revenge, Leviathan , and The Dragon's Breath.