A shire of the Kingdom of the Rising Winds, located in Anderson, Indiana. 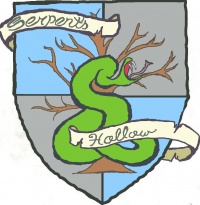 Serpent's Hollow was founded on March 13, 2011 by Verial Zarendian and a small group of friends. Many of the founding members have since stopped playing Amtgard for one reason or another, though a couple of key players still remain, most notably, Saladin Rigopulos, who has more-or-less run the show since September, 2011.

After the death of Achilles drove Verial Zarendian to plans of vengeance following the great Trojan War, he vowed to not return to his home in Ithaca until he had exacted his vengeance on Prince Paris, Achilles' slayer. As a result, he founded Serpent's Hollow with the aid of Liam Tallory on the lands over the subterranean lair of a dormant giant serpent in an attempt to gather the best and brightest warriors from all the lands. Once his army was formed, he would once more declare war on Paris's lands, and finally have his revenge.

Officers Past and Present

Serpent's Hollow had a rough founding in that many officers chose not to do their jobs after a short time. Some had life get in the way, such as in Verial Zarendian's case. Most, however, simply did not want to do their job as they were required or simply quit attending meetings. Saladin Rigopulos has been running the show after playing for six months by doing all of the officer duties in one way or another once it was seen that a lot of work was not being done up to standard. Upon his election as Sheriff he took upon the rest of the duties of Prime Minister and Regent.