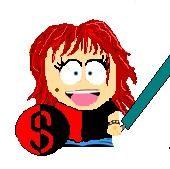 "Sabine is the girl who brags just enough."

Sabine started playing Amtgard in the winter of 2003 at Twisted Rivers. She became a Saracen in the winter of 2004 and plans to be buried in red and black. Sabine attended the last Discord before taking a seven year hiatus from Amtgard. She returned to play at Wolfheim in what was now The Kingdom of Polaris. Sabine was again all in attending Keep on the Borderlands in 2017, where she was named Chieftain of newly formed Saracen Tribe Ursa Noir, first Saracen tribe of Polaris. Sabine now attends Tanaka's Gift a park she has co-founded with Jaris north of Milwaukee Wisconsin. Sabine loves everything A&S and is always crafting up something. In Polaris she is known for her stabbing... wool into neat sculptures and masks.