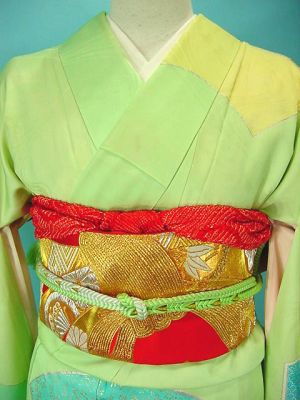 Modern Obi with cording and sash

Obi are the top-most sash worn with various styles of Japanese clothing; several other sashes may be worn under the obi to secure the clothing in place and/or to enhance the shape of the body or of the uppermost sash. 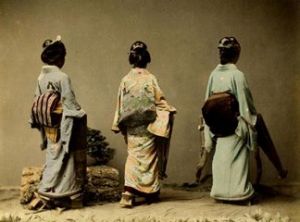 The first obi were just braided cord, similar to the obi-jime, but longer, they were wrapped around the body a few times and tied in the back, front or side, after the wearers preference. It’s only purpose was to keep the kimono wrapped in place and did play a very decorative role of the garment. This was called a “nagoya obi” but is not the nagoya obi we know today.

Later on, the obi became more similar to the obi we know today. It was still a braided cord, but with tassels, and it was wrapped around the body three or four times to make a wider appearance. During the mid Edo period the obi became a wider piece, and began to play a larger role as a decorative element. A story says, that there was an onnagata (a man playing female roles) kabuki actor who was very tall, and he wore a very wide obi, to make him look smaller. Kabuki costumes has always played a significant part in evolving of the fashion, an the look with the wide obi came more popular. The kabuki actors also inspired the public with their elaborate obi bows, and the women often copied the onnagata.

There are more than a hundred (some say five hundred!) ways to tie an obi, and the first popular musubi – or knot – was the darari obi, which is still worn by the geisha apprentice The other popular bow, which is still the best known (and maybe easiest to tie) and widely used.

There are many, many kinds of obi, ranging from the up to six meters long and heavily brocaded maru obi to the narrow cotton belt for the yukata or the belt of martial arts. There are hundreds of ways of tyeing obi, and most Japanese women can only tie one or two basic bows only, unless they go to classes to learn various ways to make difficult shapes. There is a license to be a professional kimono dresser who can teach this art or work in the wedding halls to dress brides.

Some have said that the Niishijin weavers started the craze because of an astounding slump in the demand for their elaborate woven brocades. The restrictions did not allow common people to wear these extravagant and expensive Kimono, but did not forbid them to wear elaborate sashes. With the help of the Kabuki actors, who helped promote the beautiful new sashes, the demand for the expensive brocade weaves continued. 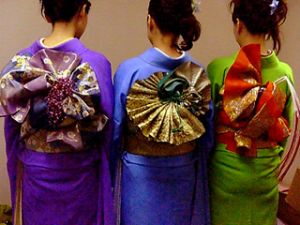 The uttermost formal obi for women is the maru obi, and typically very expensive. It is normally approximately 4 meters long, but some can be up to six meters. It is 32-33 cm wide and is beautifully brocaded over the whole fabric, on both sides. It is always fully patterned; usually decorated in small, repeated motifs; often in multiple colors. It is folded in two along the long side, and then wrapped around the body a couple of times. It is often tied in the taiko drum bow for married women, where young unmarried women wear them in a more elaborate bow. Both ends can be the trailing end. The maru were the most popular of the kimono sash in the 19th century is now rarely in use mainly because of its lengt, heavy weight and price. It is only used by brides, geisha, at weddings or other very formal occasions. Geisha apprentices, maiko, wear the maru obi in a special bow, called "darari", where the two panels hangs almost to the ground. 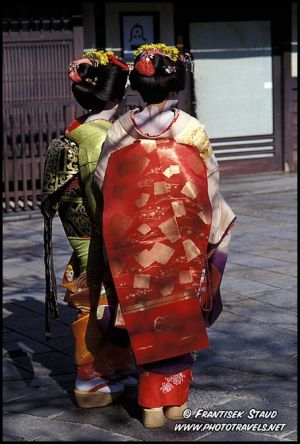 Around the 40's or 50's, Maru-Obi was developed into Fukuro-Obi making itself easier to put on. It is similar to maru obi in size and length. So Fukuro- Obi still has ceremonial or formal aspects, but can also be put on rather casual occasions. It is now the most widely used obi for formal occasions. The fukuro obi looks like a maru obi when worn, but contrary to the maru obi, the pattern is only one one side of the 32 cm wide fabric. The end of the obi that is wrapped around the body first (so it is the internal layer), does not have pattern on it either, sixty percent is patterned while the rest part has no patterns. This makes the obi less heavy, and it can be cheaper. The fukuro obi can be worn for formal wear, but is less formal than the maro obi.

Nagoya obi is, on the part wrapped around the body, only half width of the fukuro and maru obi. The other half has the same width. Nagoya-Obi is used in the wide range of occasions from the casual to the formal, which was invented in the Taisho Period. You can distinguish Nagoya-Obi from others because of the difference of their shapes. Nagoya-Obi has a narrow part and a wider part. It is a bit shorter, 314-345cm than other two obis. There are various designs for Nagoya Obi and although the Nagoya obi was produced for casual wear, it has transitioned into a style more for fashion. The Nagoya obi is less expensive than the Maru or Fukuro obi, but today if the brocade or tapestry design permits, may be allowed to be worn as lower level ceremonial wear. It is used for mostly young or unmarried women. 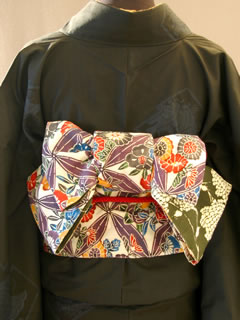 "Hanhaba" means "half the width". Hanhaba-Obi is usually put on with casual kimono so that you can do little things. The main feature is "easy to put on, easy to take off". The reversible ones are often seen with gorgeous embroidery. Hanhaba Obi is very much in demand. There are some young Japanese Kimono wearers recently and they love this kind of obi, because it is easy to tie and invent new bows.