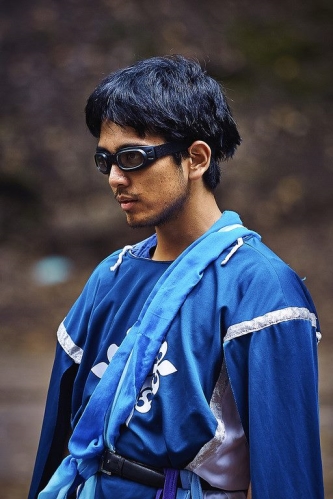 Endol is made of wonderful magic. He has also been seen dancing with a certain Bear in a most becoming, and Maidenly fashion. Speaking of dancing, he also likes to dance with ribbon sticks... probably due to years of sexual identity repression.

Okay, but seriously now, Endol (mundane: Louel) first started LARPing in December 29th, 2013, because his New Year's Resolution for 2014 was to find an active hobby. (Because gyms are SCARY. And none of his roommates wanted to play Just Dance with him that year. Sad face.) He didn't even know what LARPing was, but after talking to his older brother that Christmas, who wanted to start a Walking-Dead-themed LARP up in South Lake Tahoe, Endol decided to search for LARP groups in Berkeley upon his return from the holidays and, lo and behold, there was a Berkeley chapter of "Amtgard." Over a year later, Endol still participates as much as he can in Amtgard, though isn't quite suited to jump into its politics. He really just wants to hit and get hit by people in fantastical ways.

It has been a wonderful experience to see Wyvern's Spur grow! During that first field day, there were only 4 others there at the park...!!

Endol also occasionally plays Jugger with Jugger California after befriending a visiting scholar from Germany, Jorn (who played Amtgard for a couple months), told him about the sport. Soon after Jorn returned to Germany, Azus shared a link to the Wyvern's Spur page about a group wanting to start Jugger in Berkeley. Coincidence? I think not. Or... He thought not. (This third person thing is weird.)

Among the members of the Jugger group is Craig, a Dagorhir player, who has also introduced Endol to that world. Thanks to that, Endol has learned that he needs to slash (and not stab) a bit more. (And that a sure way to make any "overly-macho" situation more welcoming to a flurby gay guy like Endol is to get legged... and then fight like a crippled wailing banshee... and somehow win a round.)

Did he mention he was gay? No? Well, he'll probably mention it as soon as you meet him.

Endol likes playing Bard. A lot. He hopes to make a few distinct costumes for it and play each one very differently while singing different octaves/styles... but hasn't been that bored yet. He'd also like to make his war-cries a variety of the Do-Re-Mi syllables... 'cause right now, he just kinda shrieks and squeals. But everyone loves battle noises.

In December 29th, 2014 (exactly a year from his first Amtgard field day), Endol had a new friend... his little rosebud named Atomos. Atomos is a part of the small intestine that protrudes through Endol's abdomen. Yep, he's an ileostomy! And he gets his very own poop bag! Thanks to his presence, Endol has been wearing 5pt plate armor for Bard since January 2015 (even though he can only buy 1 point of armor for 4 spell points. Sad face). If all goes well, Atomos will be going back inside Endol on May 1st, 2015 and Endol will be able to frolic and prance more freely again.

Endol's kinda a bard in real life! His website is

There's not much on it now, and there probably won't be for a while, but... yay theater!

"It's not sexual harassment. 'Cause I'm gay."

First Order of the Jovius

First Order of the Griffon