N. A shift for your head. The coif is in essence a close fitting linen cap that covers the top, back, and sides of the head, worn by all classes in England and Scotland from the Middle Ages to the early seventeenth century (and later as an old-fashioned cap for countrywomen and young children).It should be made of white, off-white or cream linen and, ideally, should be all hand-sewn. In german a coif is called a Bundhaube. 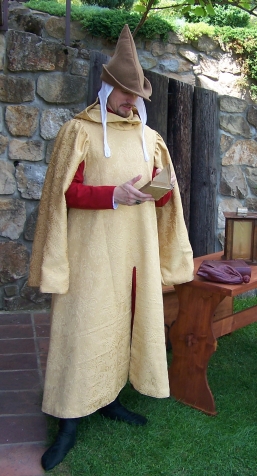 A gentleman wearing a white coif under is felt hat

Hair is dirty. It gathers oils from your skin, and dirt from every where else. In the days before Shampoo, invented in the 1930s people used soap A soap-like material found in clay cylinders during the excavation of ancient Babylon is evidence that soapmaking was known as early as 2800 B.C. Europe before, the Roman invasion and after there decline, was home to more than a million people who might never have washed here hair in there lives. So hats were very popular.

Worn by women, men, and children throughout the Middle Ages (c. 500–c. 1500), the coif was a simple fabric cap that covered all or most of the hair and tied under the chin. Coifs could be worn under another hat for extra warmth, but they were frequently worn alone. They were usually made of plain linen or wool, although soldiers often wore a coif made of chain mail (flexible armor made of intertwining metal chains) under their helmets. Coifs were most often black or white, and some had embroidered designs.

Coifs first appeared as common European headgear during the 900s, and they were widely worn until the 1700s. Before 1500, a simple two-piece coif was popular, with a seam down the middle of the head. After 1500, a more tailored three-piece coif was fashionable, with two seams allowing it to fit the head more closely. Rich and poor alike wore the caps, which provided warmth and modesty. Many priests and monks wore simple linen coifs, and travelers wore them under felt caps. Married women wore coifs alone or under veils to cover their heads for modesty.

By the beginning of the Renaissance around 1450, many different shapes of coifs had been developed. Most of these were worn by women, and the shape and size of the coif could be used to show the wealth and class of the wearer. English women wore coifs that came to one or several points at the top, while French and Flemish women commonly wore round coifs that sat on top of the head and tied under the chin.

An Elizabethan style coif with blackwork

How to wear one