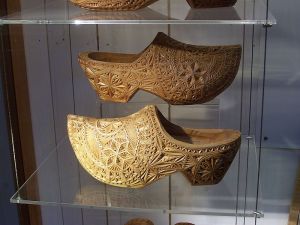 Traditional clogs were made out of willow or poplar wood and are associated with the Netherlands, Belgium, Denmark and Sweden (though Swedish clogs do not resemble Dutch clogs) as part of the touristic "Holland"/Sweden image, where they are seen as a form of national dress. Because of this, Dutch people are sometimes called cloggies, that is, clog-wearers. In Dutch, clogs are known as klompen. The traditional, all wooden clogs have been officially labelled as safety shoes, passing European standards for the CE mark with flying colours. Today, Dutch clogs are available in many tourist shops. Wearing clogs is considered to be healthy for the feet. Despite that fact, the Dutch don't use them anymore for everyday use, but clogs are still used by people working in their gardens, and by farmers.

In England slats of wood held in place by thonging or similar were known as "Pattens" and they were usually worn over leather or fabric shoes to raise the wearer's foot above the mud of the unmade road. Poorer people who couldn't afford shoes wore wood directly against the skin, and so the clog was developed, made of part leather and part wood. The English tended to carve Welsh and West Country alder, Scottish birch and Lincolnshire willow. The Welsh used alder, birch & sycamore.[1] The wearing of clogs in Britain really took off with the Industrial Revolution, when workers in the mills, mines, iron, steel, and chemical works, workshops and factories needed strong, cheap footwear. The heyday of the clog in Britain was between 1840s and 1920's and, although traditionally associated with Lancashire, they were worn all over the country, not just in the industrial north of England.[2] There is a theory that clogging or clog dancing arose in these mills as a result of the mill workers entertaining themselves by syncopating foot taps with the rhythmic sounds made by the loom shuttles. Clog dancing became a widespread pastime during this period in England. During the nineteenth century, competitions were held and there were professional clog dancers who performed in the music halls.

Clog dancing is a continuing tradition in Wales. The difference between Welsh clogging and other step dance traditions is that the performance will not only include complicated stepping, but also 'tricks'. For example, snuffing out a candle flame with the dancer's feet, 'toby stepping' - similar to Cossack dancing — and high leaps into the air. Clog fighting, known in Lancashire as 'purring', was a means of settling disputes. Both the fighting, and the betting among spectators was illegal.

The French name for a wooden shoe or clog is sabot. in the 18th and 19th century clogs became associated with the lower classes. From this period the word sabotage derived from sabot, reportedly describing how disgruntled workers damaged workplace machines in France by tossing their shoes into the mechanisms. However, according to some accounts, sabot-clad workers were simply considered less productive than others who had switched to leather shoes, roughly equating early use of the term sabotage with inefficiency.

Clogs are traditional also in Northern Italy and southern Switzerland, where they are often part of the traditional local costumes.In Friul, clogs are called, palotis, galosis or dalminis. They are traditionally made with an upward pointing wooden sole and a leather hood.

In Asturias, Cantabria and Galicia, the self-governing territories in north west Spain, there is a long tradition of clog making and wearing. The Asturian clog is unusual in that it has two 'feet' on the ball of the foot so that with the heel, the whole clog is elevated off the ground by three supporting structures, almost on mini stilts. (see picture of the Cantabrian clog below). This is useful when working outside or in the barn. These clogs are still worn in many rural northern Spanish 'pueblos' today. Traditionally a slipper is worn inside the clog and the clog is kicked off at the door before entering the house.