A Renamed Shire of the Kingdom of the Rising Winds, located in Paducah, KY. 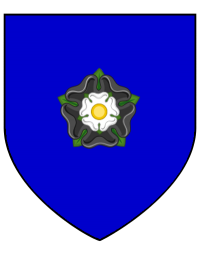 The group's Heraldry was azure, a rose sable barbed and seeded Vert representing death, and it's words are simply "By Force." However, a joking submotto is "Don't forget the umlaut" or "making u smile".

The chapter was formed by members of the Quilt City Ogres, a chapter of the international analog gaming club - the Organization of Gamers & Roleplaying Enthusiasts - operating in Paducah, Kentucky as an outlet for live action gaming. The park was officially recognized in October of 2011, and began fully gaming weekly by January of 2012. At Keep on the Borderlands in September 2012, the park was voted into the Kingdom of the Valley of the Rising Winds.

The purposeful mispronouncing of the letter Ü is a joke, referencing a fictional location in DC Comics that a writer once misused the letter in - not understanding the sound it is supposed to make. [[Category:Founded in 2009] ]