Contessa Saint Daedera Dragoneye, Esq., of the Shire of Sky Harbor of the Kingdom of the Rising Winds 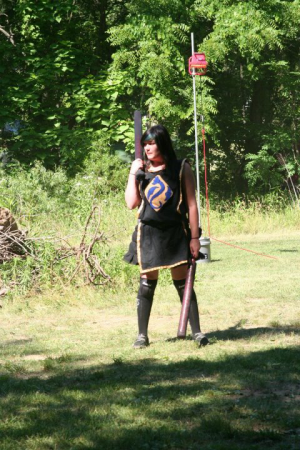 Daedera started playing Amtgard in April of 2012 when her friend, Lady Sage, requested her help to defend Sky Harbor against an evil Tyrant from Madoc's Keep, Asche Palantir. Daedera was the president of a gaming club at a local college and rallied her friends to defend Sky Harbor. The raid was unsuccessful, and Sky Harbor was defended. Daedera continued going to both Madoc's Keep and Sky Harbor on a regular basis. Her and her friends created a household where their persona's were all related. Daedera's involvement in Amtgard has continued to grow; expanding into local and kingdom politics, arts and sciences, and fighting companies.

Started dating Asche Palantir during Bridgewars 2012, after a group of traveling drunk men asked her if she was single. Has been happy ever since.

Temple of the Vanguard (Hooded)